Book Review: Why a Man Should Be Well Dressed

I love a book whose author dares to actually assert a viewpoint. In clothing, this means more than simply asserting “style is eternal” or “nice clothes are nice”, as most books on the subject seem to do. For his forthrightness, Adolf Loos’ slim volume of (recently translated) collected essays is a delight, recalling in its precision and cantankerousness the missives of Hardy Amies. However, despite his unearned reputation as arbiter faute de mieux, Hardy Amies was to menswear prognostication what Bill Kristol is to political ones: unfailingly wrong. Loos also brings good sense, a charmingly dated wit (often employed at the expense of the Germans) and lucidity about his nation’s place in the fashion world.

It’s hard for me to overstate this last point. Loos’ essays date from the late 19th century through the 1920s, yet from the earliest of them, he acknowledges that “the center of Western culture is London,” despite writing during the days of the full-blown empire of Austria-Hungary, stretching from what is now northern Italy to southern Poland. And, let it not be forgotten, during the days when those nearly forgotten names that once dotted the Graben, the Kohlmarkt, the Kärntnerstrasse, those Viennese tailors and princely haberdashers in their glory, were in their heyday. Like unfinished tombstones some of them still have their shells, complete with graven 19th-century founding dates, on those Vienna shopping streets. H&M occupies one of their buildings now.

Loos himself is intricately bound up with at least one of those Viennese tailors, perhaps the only survivor of those days, Knize. He designed furnishings for its tailoring floor (including a dodecahedral ceiling lamp), its façade, and famously, its staircase. On my last visit to this near-mausoleum, the staircase seemed starker than I had remembered. Reading Loos’ book reminded me of his opposition to needless ornament, to adornment for the sake of standing out, to pretention. I also learned that, in Loos’ view, Viennese tailors owed their reputation only to reflected glory: to him, Austrian nobles who frequented the English court, and English court tailors like Henry Poole (the only London tailor he mentions by name, over and over), had edified local Viennese tailors with their imported English clothes of impeccable construction, design and taste. In their turn, the Viennese tailors had absorbed and propagated the best of those techniques, colonizing for their part hinterlands like Berlin in Germany, which, Loos writes, lacked any good tailors until a Viennese one set up a satellite there.

Amusingly, the Germans are Loos’ bugbear, or the foils to his restrained Viennese and English Herren. If Loos snipes that the height of Viennese good taste is to adopt a style of hat that the English were wearing five years ago, the Germans are instead dandies for dandyism’s sake, adopters of flamboyantly different styles simply in order to stand out. They are dirty, inventors of disposable or easily replaceable clothing items that allow the wearer to skip washing either his clothes or his body, such as celluloid detachable shirt collars and immaculate fake shirtfronts (known as dickeys, or rather today only as those shirtfronts that roll up like cheap blinds on pompous cartoon characters). They dither self-importantly, taking so much time to choose a single necktie that an Englishman could have had a new pair of shoes made in the meantime.

In Loos’ clothing essays it’s interesting to see attitudes that hew so closely to his architectural philosophy, which certainly was not conservative or backward looking. Indeed, one of his essays is almost Panglossian in announcing that the practicality of modern clothing, and the removal of sumptuary laws, made his current day the best time in history to wear clothing. Loos did not eschew creativity or invention. Instead, he objected to needless invention, the affectation of his German targets, in contrast to the ease and confidence of English gentlemen who dressed with tasteful anonymity.

This attitude, of confidence in a uniform concept of correct dress, seems far from today’s world, where to dress with any degree of care may be to stand out… like a German. Our ideas of correct dress today may be far from uniform, even if adopting what men were wearing in London five years ago still is a decent rule of thumb for many of us. To be tasteful today may sacrifice our careful anonymity. Loos’ ideas, nonetheless, merit our consideration. Their expression in this set of essays is also a charming time capsule. He writes that the best Viennese and English tailors themselves carefully guard their own identities, taking care not to attract too much attention or too many clients. Today, too many tailors have died from lack of any attention at all, while a few at the very top who are left – including the one English tailor Loos names – may have too many customers to consistently enforce the level of quality that made their reputation.

Nonetheless, sound ideas rarely abide so closely to entertaining snark (the elusive Wiener Schmäh, perhaps) as well as observations that to a non-Mitteleuropean seem as quaint as The Grand Budapest Hotel. Did you know Plovdiv is to Vienna what Vienna is to London? That it’s hard to buy socks in the Balkans in 1900 because they still use “foot cloths”? Those assertions abide next to dead-on musings about shoes and Viennese shoemakers (still excellent), facial hair, luxury, and more. A wonderful read that is frankly more digestible than the whipped cream Schlagobers you may have consumed with it. 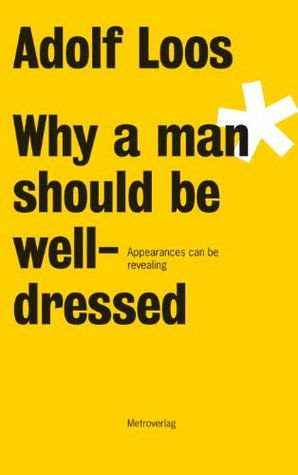