As a costume designer my job is to help create authentic characters alongside the director & actor. I put together outfits that speak, both directly and subconsciously, to who the wearer is. On the morning of my fitting with Andre Benjamin for his character Fredwynn (Dispatches From Elsewhere, on AMC), I remember pacing around the room examining and re-examining the pieces I had selected for him. I have long been a fan of Andre’s stage style and music career. I felt uncertain how someone who I have always see as an American icon would react to the pieces I chose for him. It was surreal.

Fredwynn is a bit of a conspiracy theorist. His character is wealthy and intelligent but lacks emotional depth and social ease. He’s a connoisseur of … just about everything. I wanted his style to reflect deep knowledge of sartorial rules and the rejection of them all at once. In my mind Fredwynn is someone who researches brands and designers before he purchases anything from them. He could probably give you a healthy lecture on the origins of the word “coat” and debate for hours over the latest developments in Immuno-Oncology. He might read or even post on Style Forum.

When Fredwynn meets Sally Field’s character Janice they embark on a mysterious and comical journey of emotional growth. The show asks the viewer to suspend reality on certain occasions. Fredwynn needed a wardrobe ready for anything. Fredwynn needed 18 outfits for the 10 episodes series. Within these 18 outfits we would need to address specific situations he would encounter, ranging from a funeral, to sleeping, to going to lunch, and of course those moments of suspended reality. 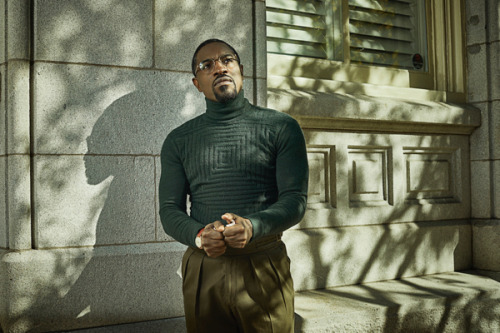 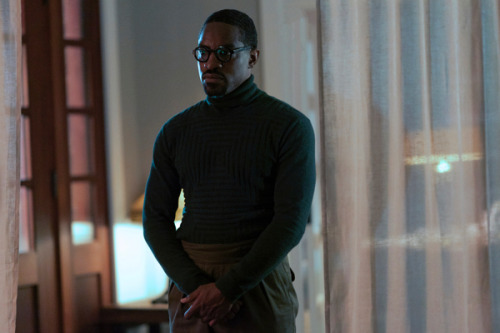 Early on in the season, we featured this green T-Michael sweater on Andre in both the black and green colorway in a monochromatic look, paired with a pair of olive-green cotton pleated trousers from Rubinacci. The heavy-treaded Bally boots became a staple of Fredwynn’s footwear. In this episode, Fredwynn explores different realms of reality, and the sweater represented this nested, disoriented universe. Fredwynn style eventually becomes more playful in color and silhouette – the Ikire Jones jacket described below is an example - but here at the outset Fredwynn’s style is highly controlled and deeply serious. The palette and silhouette are stern and simple; only the pattern of the sweater suggests the brewing complications. 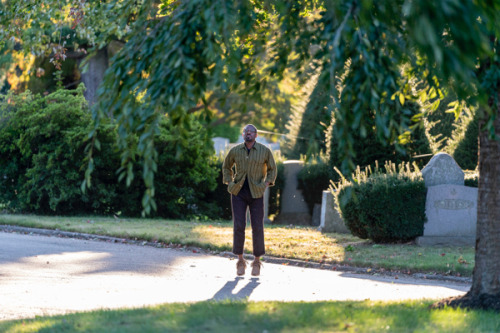 My favorite head to toe ensemble was a navy and camel colored cashmere sweater from Deveaux New York, worn with dark chocolate Visvim trousers, and complimentary tan colored Visvim suede sneakers both bought from Creme in Philadelphia. Over the sweater I put an incredibly soft, green, striped overshirt from 18east. Andre had to wear this outfit for a few days since the scenes were long and half of the shots were outdoors. I wanted to make sure we chose an outfit with layers in case of unexpected weather.

My favorite piece on the rack was a 2pc cotton crepe suit by Camoshita. I ordered 2 of these suits from No Man Walks Alone. The butterscotch coloring gave us a fun element to play off of.  At first glance it looks neutral; but as you look closer it’s a color that you won’t find in anywhere else. A lot of the times I debate the use of color with my production designer. If my production designer wants a cream-colored wall and I want a cream-colored shirt we have a showdown. This suit was a color of such exquisite uniqueness, I knew if I could get it on camera it would sing take on many personalities.

Having a suit that Andre could move freely in was essential for these scenes because he had to run & climb quite a bit, and the Camoshita suit allowed that. Eventually we paired this suit with a blue plaid button front shirt worn untucked and a pair of ridiculously extravagant sneakers from Bottega Veneta. Our prop master brought in a selection of glasses and watches for us to choose from to finish Fredwynn’s look. (Each of Fredwynn’s 18 outfits had different glasses and watch pairings.)

Andre Benjamin and Jason Segel shared many scenes in this episode so I wanted to illustrate how wildly different these two characters could wear a similar silhouette. Jason’s character, Peter was wearing a felted chore coat, with an untucked button front shirt and dark jeans. Peter, unlike Fredwynn, does not see his clothing as an opportunity for choice. Peter tries to make as few choices in his life as possible and his wardrobe is no exception. Peter wears this same outfit or slight variation on it everyday of his life. 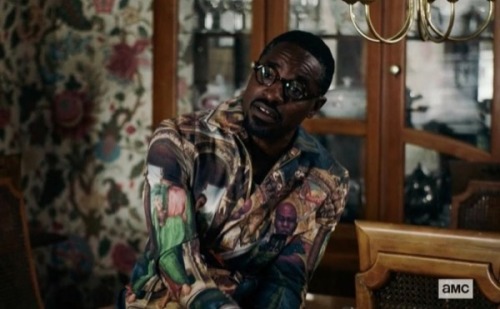 One of the first pieces I pulled for Andre was this two-pocket printed cotton safari jacket designed and made by Ikiré Jones in Philadelphia. Ikiré’s jacket was the crown jewel of Fredwynn’s wardrobe because it embodied both the show’s exuberant imagination and Fredwynn’s refined, yet unexpected tastes. 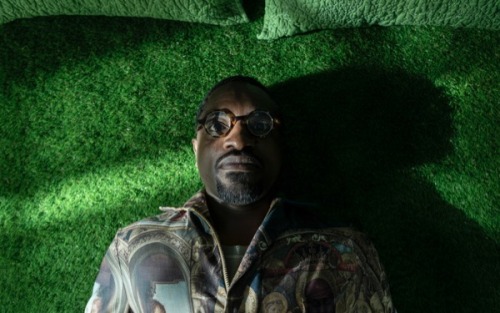 Everyone in the office fell in love with this jacket. We kept taking it in and out of scenes because we thought it was either too distracting or not being seen enough. Including it in a scene was a high-stakes decision because we knew that after it appeared on camera it would be retired. It’s too noticeable to be seen more than once in a season without distracting from the characters and the story.

Eventually we placed this Jacket in a scene where Andre’s character arrives in a mysterious house and uncovers a dark clue resulting in the possible answers to the disappearance of a young woman. In the main room where we shot our scene, our Production Designer (Kate Bunch) had decorated the walls with a similarly colored wallpaper. Unintentionally our colors and patterns blended and conflicted with each other. I think our show runner said it looked like Laura Ashley on acid - which couldn’t have made me happier. I like to throw out moments of heightened style on every project I design. I always tell directors and actors, “we are making a movie (or Television Show), not a documentary.” Let’s have fun, let’s try new things and have faith that our audience will be along for the ride. At minimum let’s just put something relevant on screen.

Working with Andre may have been the highlight of my career. Dressing actors who are unafraid to try new brands, different styles, and unexpected fabrics is challenging and incredibly rare. After reading the script for Dispatches From Elsewhere, I spent a long time imagining how Andre would look as Fredwynn and finding the pieces that would help Andre bring Fredwynn to life. After all my pacing and planning, Andre wore these outfits effortlessly.

All images used by No Man Walks Alone with permission from AMC Networks.