Many designers today, even those considered avant-garde, start their design process by delving into vintage archives. It’s just a question of where they take their inspiration. For Japanese designer Go Fujito, the process is as much about drawing from archival designs as it is about staying true to his personal history. As Fujito puts it, “clothes are about living,” which means style should always have some kind of contemporary relevancy.

As a teen growing up in the ‘80s and ‘90s, Fujito was in the thick of Japanese youth subcultures – a breakaway from the past, when youths dared to be a bit more rebellious. Fujito skateboarded and played football; he listened to punk rock and hip-hop. He was also heavily drawn to Harajuku, a district of Tokyo known for pushing rock ‘n roll fashion to young Japanese people disaffected with Ivy style.

If Fujito’s version of Americana feels familiar, that’s because he draws from a period many of us lived through. Instead of vintage, archival styles from the early 20th century, Fujito’s collections are inspired by the mid-century designs favored by youths in the ‘80s and ‘90s. There are soft, comfortable fleeces for hiking and camping; thick striped sweaters and shirt jackets for record hunting; and jungle jackets and parkas for everyday use. We sat down with the designer to talk about his history, design process, and work.

How did you become a designer?

Back in the 1990s, when I was in college, I worked at a vintage clothing store. This was when Harajuku was becoming a major center in Tokyo for street fashion. I got the job initially because I was interested in men’s clothing and style, but it wasn’t until I worked there that I discovered how much today’s clothes are based on vintage designs. Those years had a big impact on me, as I learned how to select and sell imported-clothes.

Later, I ended up working for Denime, one of the companies in Japan making jeans. It was there that I learned how clothes were made – from yarn selection to weaving, pattern making to garment washing.

After many years of working for other companies, I decided to make my own clothes. I started with simple screen-printed t-shirts, which my friends and I made in a garage. We moved up from there to jeans, which I’ve always considered the king of men’s casualwear, and have since expanded into a fuller collection of knitwear and cut-and-sewns.

You mentioned Harajuku. Were you involved in any youth subcultures growing up?

Absolutely. I was born in 1975 in a city called Sasebo, which has a big US military base. I actually came to the United States for the first time in 1984. I stayed with my cousins in San Diego and still remember how they showed me their break dancing moves while we were in their kitchen. When I returned to Japan, I brought with me a pair of Nikes that I had bought back when I was in California. It made me something of a celebrity amongst my classmates.

During this time, when I was a teen, I got involved in the local football and skateboarding scenes. Skateboarding actually opened up new cultural avenues for me, particularly in fashion and music. I listened to a lot of punk rock and hip hop, both of which really influenced me. I still count Matt Hensley, a former professional skater and now a musician, as one of my heroes. 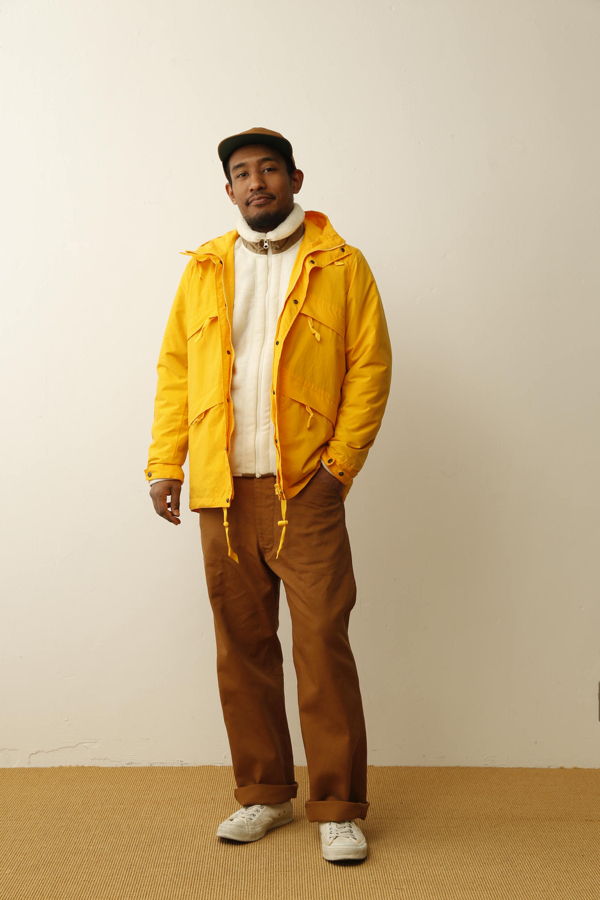 Tell us about your design process. What inspires your work?

Fujito is made for everyday purposes. The clothes are meant to be worn roughly and casually, so they naturally have a bit of sportiness to them. Even if the item feels familiar and “normal,” I try to make things with a sophisticated and sporty feel.

Lots of things influence my work, from music to movies to art to friends to skateboarding. Back when I just started by brand, my mother told me that I had look at more art. Since then, I’ve made it a personal rule to always visit art museums when I travel.

Regarding the design process, I’m constantly thinking about my next collection. We have  small team here, just three people, so we’re always sharing ideas. I may show my team the direction I have in mind for some rough designs, and then they dig into the details. Sometimes I’ll give them a theme to work around, such as “clothes for an anarchist woodpecker in a modern era.” That makes our choices for textiles and color a bit easier.

Still, the collections stay pretty consistent from season-to-season. The fundamentals are drawn from vintage clothing, either from my own personal collection or others’. We rely on those vintage clothes to learn about small details, then modify them in order to build our own “fashion language.” That can be anything from taking inspiration from the yarn dyeing in knitwear, stitching in a jacket, or some kind of fabric. We then draft up a pattern using toile, which helps us develop a fit. These details eventually all come together to make up the feeling or mood of a collection.

Many of your clothes have an outdoorsy feel to them. Do you go camping much? If so, what kind of equipment do you like?

I don’t always have the time for them, but I love outdoor activities. When I go hiking or camping, I wear boots from Goro, which are made in Sugamo, Tokyo. I like to layer with Montbell down jackets (they were really helpful during my last trip to New York City). I also recently bought a hammock from Eno. We’re now in a tent-less age!