No Man Walks Alone is thrilled to announce a collaboration between Tony Shirtmakers and graphic designer Bang Tran. We asked both Tony and Bang to talk about the process of creating the shirt, which will be live on our website this Friday, June 14. This is Bang’s design diary; come back on Friday to read Tony’s side.

When Kyle and I first started talking about doing a collaboration shirt with Tony Shirtmakers, I knew we had to do something with the Camp Collar Pocket Shirt—it’s simply the perfect hot weather style.

My process for designing graphics and illustrations begins with thinking about the “feeling” I want to evoke with my visuals. The spirit of the Aloha shirt lives in hot summer sunsets, balmy and breezy beaches surrounded by lush, verdant palms and greenery.  I wanted a botanical design, to offer the Aloha spirit something of its natural habitat.

I was also thinking of Tony’s process of creating the shirts. Tony’s shirts are cut and sewn by hand. Prints are screen printed by hand. This makes for a very labor intensive garment. How can I bring that handmade feeling to my design?

I decided to do my own work by hand rather than digitally as I often do in my other design projects. In the past, I had worked briefly for in herbarium preserving plants through pressing, and I thought  prints of real pressed plants would be the ideal medium to infuse the shirt with the Aloha spirit.

Flowers are a little too delicate to use in this way, and I wanted to avoid cliched florals anyway. Ultimately, I decided on a theme of “ancient plants,” plants that have been around for longer than humans have: ferns, magnolias, and ginkgos. With that in mind, I ended up hiking around two state parks to collect specimens for the design.

Christmas Ferns and Lady Ferns from the harvesting trip

After harvesting the plants I needed, I used a sponge to cover the leaves with india ink and pressed them on cardstock. I did multiple inkings of all the specimens, to have the right size, edge clarity, and different ink saturations to bring forward different details in the leaves. I ended up with over fifteen sheets of paper filled with different ink prints.

From there, we put together a few different digital mock-ups of what the shirt might look like; Tony eventually used a print of a Netted Chain Fern.

Current families and species of ferns appeared around 145 million years ago, well into the age of dinosaurs. The netted chain fern is a species common in the eastern states, named for the vein patterning that makes it look like netting. They grow in moist, boggy soils, which made for a messy time when collecting them. It’s an especially beautiful fern because it’s pinnatifid, meaning its pinna (the individual “blades” on the stalk) aren’t completely separated from the leaf stalk, which you don’t see quite as often as other leaf patterns in ferns.

If you’ve made it this far, I hope  you’ve learned something about both ferns and shirts. When you’re wearing it on that balmy, breezy beach and someone compliments your shirt, you can say, “thanks, the print is of a netted chain fern. It’s pinnatifid!”

I’d like to think that summer style icon Dr. John Hammond would appreciate appreciate your knowledge of ancient flora. 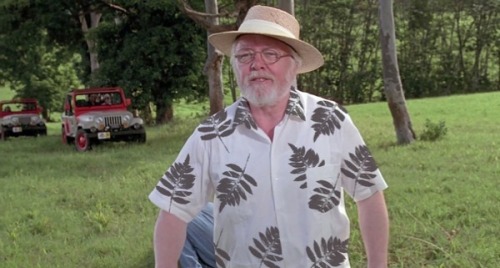